This last weekend we attended ConnectiCon, a con I've personally been attending since '06, and on J has been attending for a couple more years. Since '06, I think I've managed to miss only 1 CTCon, even years we couldn't attend the full weekend, we usually would hit it up for at least one of the days to scope out the dealers room and whatever events we could cram into the day.

This year we did the "Do we go at all? For a day? Two days? For the full three?" dance that happens almost every year and decided at the last minute to go for the full weekend and stay with some friends who's roommates dropped out, and I definitely don't regret the decision.

Hello friends! Today I'm going to talk about a game you are maybe familiar with called Tanto Cuore. More specifically, I'll be talking about the first expansion, Expanding the House, which can be played either together with the original or as a stand-alone game (I've played it alone and with the second expansion, I haven't played it together with the base set yet, I only recently got my hands on the original set). So let me get on with my explanation! 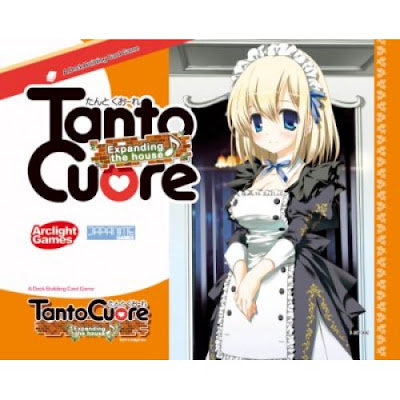 A little over a month ago I managed to get myself wrapped up in the infamous pigeon dating sim, Hatoful Boyfriend. Despite my absence in blogging about it, that doesn't mean I had stopped playing it! Just like I said I would, I got right back into that game and went after the remaining 4 pigeons, and wrapped up any loose endings I didn't get before, including the bad endings. I haven't had much chance to play it since I completed the "normal" endings, as I have been in complete rush mode in preparation for  Anime Boston and simply didn't have the spare hours to devote to exploring the legendary BBL mode, but Anime Boston is over (sadly!) so there will be a third post about Hatoful Boyfriend in the future.

In interest of doing something a little bit different from last time, and largely because my screen shots are all on the computer that I installed the game on which is currently buried under a pile of clothes and craft supplies that ended up there in the aforementioned Anime Boston rush-mode, instead of a play-by-play of each pigeon I dated in my second round of play, how about a nice Feels Chart™. 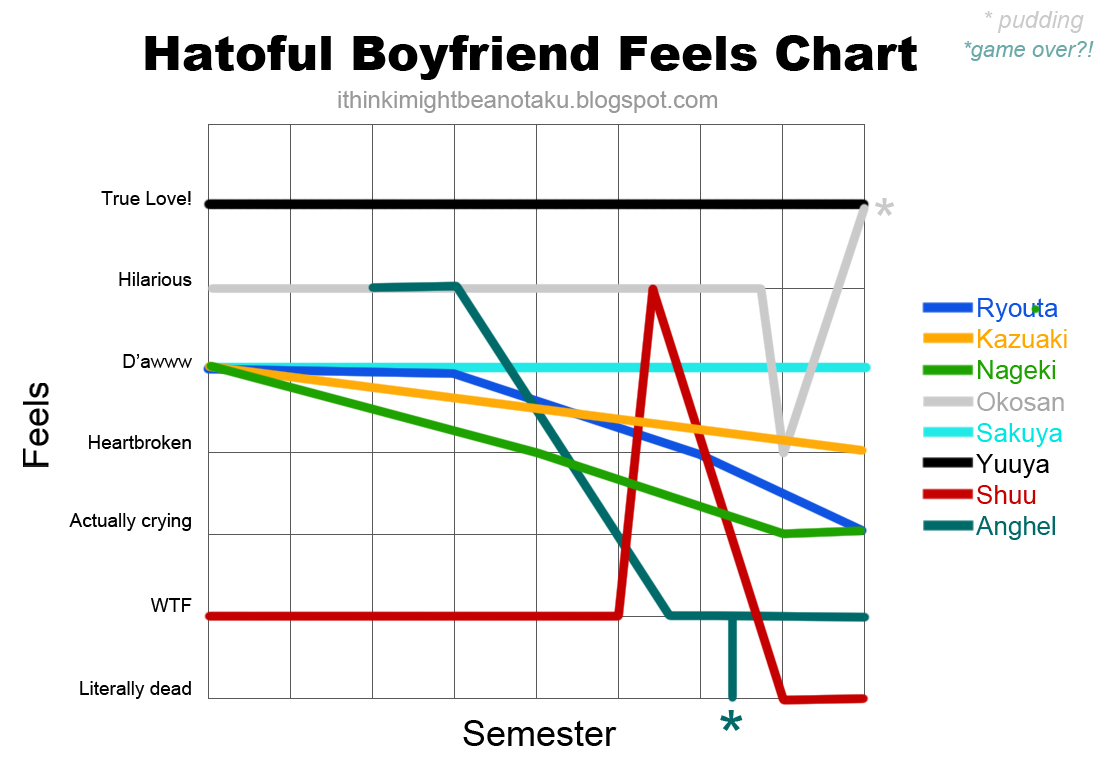 Earlier today a ridiculous picture crossed my Tumblr dash of a dating sim where you try to romance pigeons. I thought this was pretty hilarious and other people seemed to enjoy it so I hunted it down and downloaded it (It's probably going to be the best $5 you'll spend in a while) and got to playing, about 7 hours later I finally had to call it quits, not because I wanted to, but because I would have just kept playing it all night!

First, let's set something clear! When you search around for places talking about it you get a lot of places featuring it because it's so weird (and don't get me wrong, it is totally weird) and it's usually followed by "WTF Japan?", but let's get serious for a second here in this conversation about pigeon dating, this isn't some sort of weird perverse game that was created to target some very specific fetish or something like that, it's a game that started as an April Fools joke a couple years ago that took on a life of it's own. It's not so much a dating sim as it is a parody of one that ends up very entertaining and even touching. There's no pixelated bird parts, and despite playing through 4 different routes, the closest I got to a pigeon falling in love with me was (Highlight the black bar for the spoiler) helping one realize his true form of Lord Pudi. This isn't some rule 34 game, made only to fill some completely weird niche you never wanted to know existed, it's a surreal parody that ends up being more than just an extended gag.

The very basic back story behind Hatoful Boyfriend is that classic harem situation of a school full of datable anime characters, except instead of being the only girl in a school full of boys, or vice versa, you're the only human in a school for ultra intelligent pigeons. Welcome to Saint PigeoNation's Institute! Monkey jokes are frequently made at your expense, and you apparently live in a dank cave that the birds clearly find very uncivilized. However, you're bigger than the birds (although you somewhat frequently end up last place in both races and fights with some of the birds),capable of moving heavy objects, and are relatively spry enough to come in second place during a 3 legged race with a pigeon, so the birds find your presence to be pretty useful, and somehow not weird at all.

For those who need to be eased into the idea of a pigeon dating sim, there's actually an option at the beginning of the game to enable gijinka portraits for each of the characters (except Okosan, who is based on the creator's own pigeon, in his case you just get a cartoon version of a pigeon in a suit), so you can sort of imagine them as anime boys throughout the game. But don't think this is some way to totally avoid the fact you're trying to date pigeons and make the game something that it's not (you know, a human dating game), because these portraits only pop up the very first time you meet a datable character, and the game repeatedly reminds you that you are, in fact, at a school for actual pigeons.

Hello everyone! Today I'm going to talk about something that I've been reading for the better part of a decade, and that will be coming to an (abrupt) this month. The series in question is Negima! a manga first serialized in the spring of 2004 (almost exactly 9 years before when the series will end). This series follows the adventures of child prodigy Negi Springfield, as he attempts to earn his stripes as a mage, by taking over teaching a class at an all girls academy (because that's what you do DUH). Initially more about exploding clothes and gags, Negima slowly evolved from Akamatsu's gag ecchi roots into something... else. More like a fan servicey battle manga really. How do I feel about the end of a series? Pretty desolated. Let's give this story some context.

The first manga I ever read was Love Hina. I started reading it somewhere around when they released volume 4 of it stateside (It was published by the fledgeling Tokyopop, starting in May of 2002, take note that means I wasn't quite 15 yet). This series was my introduction to manga, and my beat-to-hell copies of it still have a very special place in my heart. This was sort of my introduction to a lot of things, not the least of which was agonizing while I waited for the next volume of the manga to be published (in hindsight, they put out new volumes of Love Hina pretty fast compared to the pace Del Rey kept with Negima) When Love Hina finished, despite it only being a journey of less than two years, I felt... well like a space had been hollowed out of my chest. I should also say though that I thought the ending to Love Hina was great, and I was crushed by my feels. It was a glorious end to something that, to my still green 15 year old otaku mind was profoundly amazing.

I don't live too far from New York City, so every now and then it's not too unreasonable to hop a train into the city for a few hours of adventure. Somewhat recently we decided to make an impromptu trip to New York City to hit up a couple anime, Japanese, and generally pretty nerdy shops. Being the cheapskates that we all are (hey, all our money was planning on going towards mangas and DVDs), we planned this day trip without having to pay for the subway, so everything we planned was within walking distance. Granted, by the train ride home, we seriously wished we didn't walk so far. 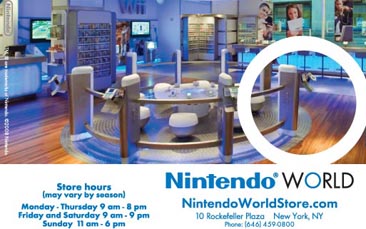 Our first stop was Nintendo World, which Google Maps misleadingly told us it was in Rockefeller Plaza. This isn't exactly untrue, but Rockefeller Plaza is sort of a big place and the entrance to Nintendo World is actually a street over on 48th street. Our trip to Nintendo World was supposed to be a sort of "Well, we're going to be here anyways" sort of thing, but after the 40 minutes or so of walking in circles we were kind of invested in the idea of going there. Unfortunately for us, Ninetendo World is sort of a flashy tourist location that's really only fun to go to so you can say you went. With the exception of maybe a few specific Pokemon plushies that might be hard to find, there's almost nothing you can buy at Nintendo World that you can't buy at a trip to almost any mall, or even Walmart. It is Nintendo after all.

The one really cool thing about Nintendo World is the mini-museum on the 2nd floor that showcases some really interesting pieces of Nintendo History, including some really neat retro systems and games. My favorite part was what looked like the "display case of shame" that featured a virtual boy and some merch from the Super Mario Bros. movie.

Nintendo World isn't really a place you should just not go to if you're making a day trip to NYC and want to hit up some neat places, but it's really no reason to make any sort of special trip. In retrospect, we sort of regretted not just going to the Lego Store a few streets over instead.

Heya everyone! This week I want to talk about a series you've maybe heard about, most likely for the very funny (if totally vulgar) dub it received from ADV. I'm talking about Gakko no Kaidan, translated in the ADV dub as Ghost Stories. It was later redubbed by animax under the name Ghosts at School. This anime was created in 2000, based on a series of books about paranormal occurrences centered around a school setting. People who have seen this anime, might have noted that it was unrelentingly shitty, in just about any way a show could be. You might also note that it was only 20 episodes long, and that the story suddenly wraps itself up in a rushed conclusion that takes place more or less entirely in episode 20. Having seen episode 19, that isn't surprising because the whole episode makes basically no sense. This is besides the fact that it, and every episode in the series other than episodes 1 and 20 are "monster of the week" type filler bullshit. The story doesn't stop there though. 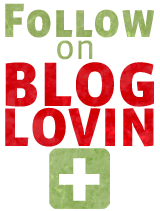 Check Out This Podcast!